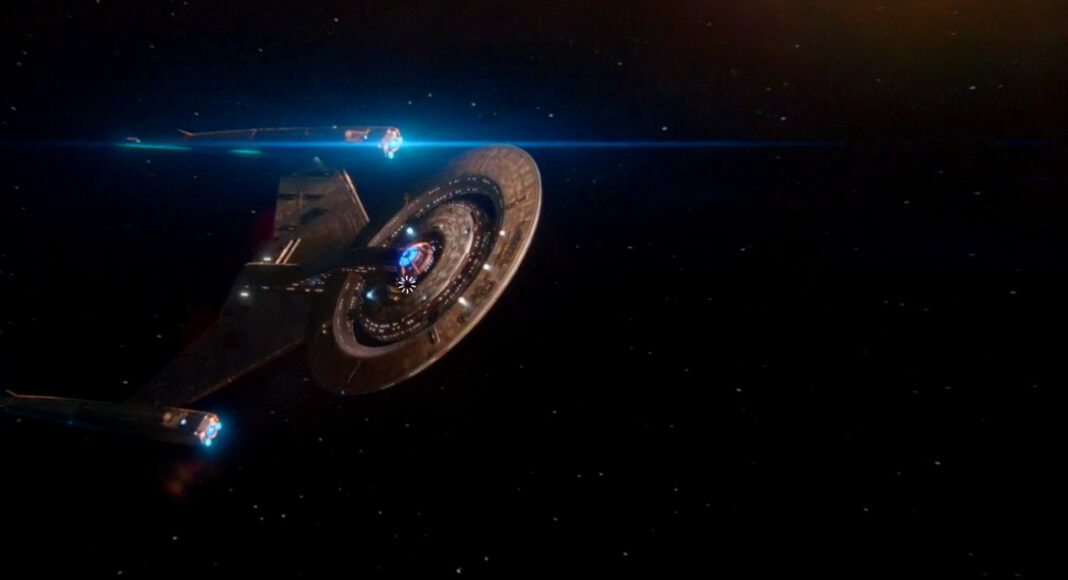 Yesterday, the first teaser of “Star Trek: Discovery” season three was released at the “NYCC 2019”. It provides a glimpse of the new season’s storyline. One thing is quite clear: “Discovery” seems to make use of the well-known Star Trek canon (Prime Universe) in a very creative way!

Now, let’s take a closer look at a few of the most important scenes.

(1) Apparently Commander Burnham has been disconnected from Discovery for a certain period of time. The trailer starts with a shot of Burnham in her Red Angel time suit (“Search Sweet Sorrow, Part 2”). She seems to have landed on a planet that looks very inhospitable. The next few shots show Burnham in a shuttle. She is wearing civilian clothes and her appearance is changing constantly. For instance, her hair is growing. Furthermore, Burnham claims to have searched for what she calls a “domino” for about a year.

(2) Meanwhile, an armed conflict seems to be raging somewhere. We see Andorians and humans (?) with strange handguns. Everything looks very threatening and chaotic. There is some evidence that political stability and peaceful order within the Federation no longer exists in the usual way. The familiar universe seems to be out of joint. Might this be an allusion to today’s society with decade-long political ties which do not seem to matter anymore?

(3) Burnham meets Cleveland Booker (David Ajala) – who is likely to join the Discovery’s crew – on a strange, hilly planet. There are two planets (or moons) on the horizon. The planet looks abandoned or at least largely uninhabited.

(4) We are once more witnessing a fighting scene in an unknown place. Or are we still on Discovery? There seems to be a strange distortion, possibly a temporal anomaly or maybe even a new kind of weapon. Since people are wearing unfamiliar uniforms, we might be dealing with some kind of civil war or insurrection.

(5) Burnham and Booker meet a man who appears to live in an intact and sterile-looking building (or spaceship). He calls it his “office.” The man is wearing a fine suit and claims that he has waited for Burnham for quite some time. Apparently, he is dreaming of a (new) interstellar federation. The flag he rolls out is very similar to the banner of the “United Federation of Planets” as we know it. There are six stars in the middle of the flag. Six potential founding worlds? He speaks of “hope” and that hope is … Burnham!

(6) Saru and Tilly in unknown civilian clothes. Did they go undercover? Later Saru will state that Discovery’s “privilege” is to make this future “bright.” That sounds very cryptic…

(7) The unknown man seems to be of greater importance. Apparently he is a politician – possibly the president of the remnants of the Federation.

(8)  Wow, look at that! Apparently we’re on Trill. This cave suspiciously looks like one of the “Caves of Mak’ala” on the home planet of Jadzia and Ezri Dax (“Deep Space Nine”). The Trill symbionts are known to be raised here.

(10) So, the Trill hypothesis has proven to be correct. However, these Trills do not look either pleased or friendly, unlike Jadzia Dax.

(11) Reunion after a long (?) time: The crew of Discovery welcomes Burnham, who is now – with long hair – back home. Here, a very emotional Tilly is hugging her best friend Michael.

(12) “Their fight begins” – Apparently, Discovery’s crew must face enemy forces for one more time. Will they be able to survive in an alien, hostile and technically superior world? And can they – one can assume – once again save the galaxy – or at least what’s left of the Federation? One thing is for sure: Season 3 will be full of action and drama again!

Here it looks as if Discovery has been boarded by hostile forces.

(13) Georgiou as we know her! The former Empress of Terran Empire seems to feel comfortable in that rough era and shattered universe.

(14) And now have a close look! There are attackers with strange handguns. Apparently they belong to the same unit or fleet, because they are wearing the same uniform. Among them are two Andorians, a Cardassian, a human (or Bajoran?), an unknown species and…MORN !!!

No, that can’t be him, but it’s probably a conspecific of his – a Lurian. This is – from a 24th century point of view – a very intriguing combination. Could have an interesting group dynamics…

(15) I believe I’m dreaming!!! Georgiou is not only wearing a Starfleet uniform – no, it even looks as if she is wearing an Admiral’s uniform (watch out for the shoulder part and the rounded Starfleet logo)! What’s going on here?!

(16) Burnham in action with a phaser. What stands out: First, her hair is much longer, which looks nice by the way. Second, she is no longer wearing a silver uniform. Is that gold or bronze? Looks like bronze here. Is Burnham at security service or is she working as an engineer now? That makes little sense! Gold, on the other hand, would suggest working as an XO or even as ship’s captain in the future. Maybe she is just wearing another person’s uniform here. In another screenshot, it looks more as if she is wearing the golden version of the uniform.

(17) Discovery in action. From a technical point of view, the crew will have much more to stuggle with in the 32nd century than Voyager in the Delta Quadrant of the 24th century.

(18) Burnham and the unknown man holding hands. My guess: Together they will try to re-found the Federation and to lead the galaxy into a new era of peace and prosperity. But that‘s pure speculation at this very moment! The new season will give us an answer for sure.

(19) Season premiere will be sometime in 2020. Since “Picard” is going to run in January and February, Discovery is very likely to follow in fall or winter. 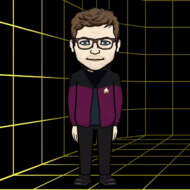